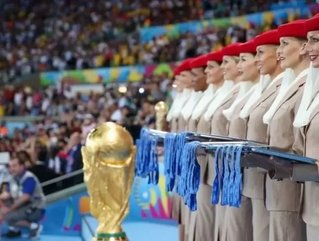 Emirates, an Official FIFA Worldwide Partner, was at the thrilling finale of the World Cup to congratulate and celebrate with champions Germany.

As soon as the captivating game was over the airline’s multinational crew were ready with the medals for FIFA President Sepp Blatter.

Tim Clark, President, Emirates Airline said: "It was a fitting finale to an outstanding tournament. The FIFA World Cup final really resonated with Emirates as both these proud nations - Germany and Argentina – are on our route network.

“We have transported more than 18,000 supporters to the tournament in the past month from all over the world, a testament to the close connection we enjoy with communities and fans of the sport worldwide.

“Such electrifying events, the passion of the players and the fans, and the incredible successes on the field are why we continue to invest in sports sponsorship, particularly football."

Emirates has been an Official FIFA Worldwide Partner since 2006. For the 2014 tournament, the airline partnered with Cristiano Ronaldo and Pelé, who were appointed as their Global Ambassadors.

The final itself went the distance, with Bayern Munich’s Mario Gotze scoring after 113 minutes, a superb goal and fitting end to what has been a tournament of truly global interest.

Qatar 2022 bids to showcase the best of the Middle East in the sporting world, with Russia hosting the next tournament in 2018.