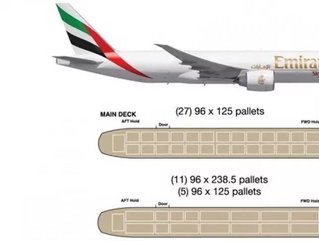 Emirates SkyCargo, the freight division of Emirates, has announced that Columbus, the State Capital of Ohio in the United States, will join its global freighter network with the launch of a weekly service to Rickenbacker International Airport from 27 May 2015.

The new freighter service to America’s 15th largest city will become Emirates SkyCargo’s 48th destination in its worldwide freighter network and sixth in the US. The announcement was made on the side lines of the 7th Air Cargo Europe Exhibition and Conference taking place in Munich, Germany, where Emirates SkyCargo is showcasing its products and services.

The flight will be operated by an Emirates SkyCargo Boeing 777 Freighter, which has the capacity to carry just over 100 tonnes of cargo, and with its main deck cargo door being one of the widest of any aircraft, enables it to uplift outsized cargo and carry larger consignments.

“Our freighters play a major role in our network strategy, and with the addition of Columbus to our freighter schedule, we will be able to connect businesses in the US mid-west and the rest of our global network through our Dubai hub, thereby improving freight connectivity and creating new opportunities for American companies to reach new markets. Columbus also serves as an ideal alternative point to Chicago where shipments originating or destined to the mid-west can be trucked much more efficiently,” said Nabil Sultan, Emirates Divisional Senior Vice President, Cargo.

“This new service and partnership with Emirates wouldn’t be possible without the common vision and tireless efforts of our business partners throughout the Columbus Region,” said Elaine Roberts, President & CEO of the Columbus Regional Airport Authority, which operates Rickenbacker. “We have been working together to position Rickenbacker as a critical global air cargo gateway for all commodities. When the Emirates SkyCargo service from Dubai is combined with the existing import and export services through Asia and Europe, Rickenbacker will provide global business solutions in a way the region has never seen before.”

"This new service extends Ohio’s reach into a critical market and provides yet another global asset that makes it easier and more profitable to do business within The Columbus Region,” added Kenny McDonald, CEO, Columbus 2020.

Expected products to be moved into and out of Columbus and surrounding areas include high fashion, pharmaceuticals, automotive spares, electronics and machinery. The flight will depart on Wednesday every week and stop in Copenhagen on route to Columbus, and in Chicago and Copenhagen on the return flight to Dubai.