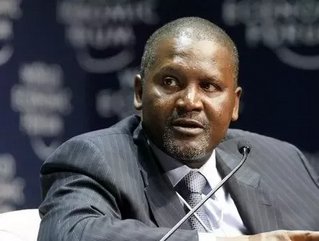 When Aliko Dangote looks back and reflects on 2011, he probably does so with a big grin on his face, and rightly so.

The name 'Dangote' is a household name in Nigeria, thanks to the Dangote Group's wide variety of products found on the country's supermarket shelves and beyond.

The biggest brand in the group is Dangote Cement, the largest company on the Nigerian Stock Exchange. Aliko Dangote, the founder, made the 2011 Forbes list of world billionaires in 2011 after his fortune increased by 557 percent, making him now worth an estimated $13.8 billion.

Those who haven't a Dangote product in their kitchen cupboards have probably seen a Dangote  exporter truck or even helped to contribute to the Group's success indirectly seeing as it dominates the sugar market in the country, supplying soft drinks manufacturers, breweries and confectioners.

The Dangote Group has 13 subsidiaries spread all over Nigeria to include salt, flour, pasta, noodles, logistics, real estate, telecommunications, steel, oil and gas among others, and operates in 14 African countries.

So who is the man behind the multi-billion dollar fortune?

Well you don't become the second richest man in Africa and the Middle East, and the 51st richest man in the world without a fair amount of business acumen and bold leadership strategies.

Born in 1957, Alhaji Aliko Dangote was a graduate of Business Studies from the Al-Azahar University in Cairo, Egypt. His humble beginnings in business started in 1977 when he began trading in rice, sugar and cement, before he ventured into full-scale manufacturing.

He established the Dangote Group as a trading business in 1981, initially focusing on cement. In the years that followed, this progressed into a conglomerate trading cement, sugar, flour, salt and fish.

In 1999, Dangote travelled to Brazil to study the up and coming manufacturing sector. It was this trip that signalled the real explosion in growth for the Dangote Group.

Dangote made the brave decision to change his Group from a trading based business into a  complete manufacturing empire – exploiting a gap in Nigeria, a country which had previously relied on imports for consumable goods.

Since the millennium, Dangote's business plan has centred around the ambitious construction of flour mills, a sugar refinery and a pasta factory and in the same year the Group acquired government-owned Benue Cement. Obajana Cement Plant, the largest in sub-Saharan Africa, was opened in 2003.

The Group's core business of providing local, value-added products and services that meet the 'basic needs' of the Nigerian population has certainly worked. In 2010, it recorded a turnover in excess of $3 billion (N450 billion) and has much more potential, too.

In September it was announced that Dangote plans to build the largest fertiliser plant in Africa in an effort to aid the country’s agriculture industry and to cut down on food shortages, scheduled to come into operation by 2014.

When accepting his Business Leader award, Dangote said he was confident that a new era had begun in terms of doing business on the continent.

“Reforms are changing the face of doing business in the continent,” he said. “Over 84 percent of economies in sub-Saharan Africa have implemented regulatory reforms making it easier to do business.

“There are still challenges to doing business in Africa but there is hope. This is a new Africa. Governance is much better. Yes, there is corruption and it is still an issue. But looking at where we have come from, things are getting better and fast.”