Another expert on board at SRK Ghana 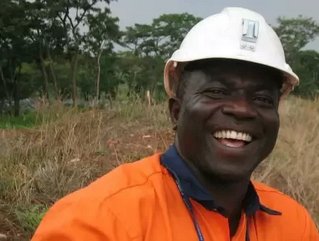 The Accra office of global engineering consultants SRK Consulting has been boosted by the addition of Ghanaian geological engineer and mineral resource geologist Eric Owusu Acheampong.

With almost three decades in the industry, Acheampong has worked in Ghana, Tanzania and South Africa; he graduated initially from Kwame Nkrumah University of Science and Technology in Kumasi, later doing his MSc in mineral resources at the University of Wales in Cardiff.

He said:e saiH “I’ve been associated with SRK since the late 1990s when I did my master’s degree in Wales. About 80 percent of the programme’s faculty tutorship was done by SRK staff from the Cardiff office.

“I had also used the services of SRK consultants on a number of projects, and admired the professionalism and the quality of the mining solutions SRK offered.

“My preference to continue my career at this stage with SRK stems from that long association and knowing also that the company is employee-owned.”

Acheampong is enthusiastic about current levels of mineral exploration in West Africa and the future of the region.

“There seems to be a positive turn-around in the political arena in West Africa lately, with successful democratic elections in Guinea and Liberia, and some political stability returning to Côte d’Ivoire,” he said.

“All of this has contributed to heightened exploration activity in the sub-region recently, at least until falling commodity prices (especially gold) slowed down the tempo in the last year and a half.”

In this context, though, let’s remember that the review of some mining codes in certain countries had mixed effects. Some governments have proposed to take a higher stake in potential developments in the mining industry – up to 35 percent in Guinea, for example.

Nonetheless, he said, the positive impact that bulk commodity projects, such as iron ore, will have on the regional and national rail, road, port and energy infrastructure continue to foster exploration for iron ore, bauxite, diamonds and gold in West Africa.

“In particular, there is increased focus in Burkina Faso, Sierra Leone and Côte d’Ivoire due to a favourable political climate and highly prospective grounds,” he said.

“Mali is Africa’s third largest gold producer and continues to attract exploration although the political tension in the country is stifling progress.

Acheampong’s career has taken him into underground and opencast operations, where his skills developed in grade control, mining geology and mineral exploration.

His studies also took him to the Graduate School of Business at the University of Cape Town, where he undertook a year-long management development programme tailored to the mining sector.

His return to Ghana from his last post in Johannesburg as Corporate Geology Manager has him looking forward to the new challenges and opportunities.

“Coming back to West Africa is very important for me,” he said. “I have strong connections and networks in the region, having worked here for more than 15 years, and am excited about serving the industry here in my new consulting role.

“My place in the team will ensure that we have adequate capacity to deliver a wide range of geological consulting services.”