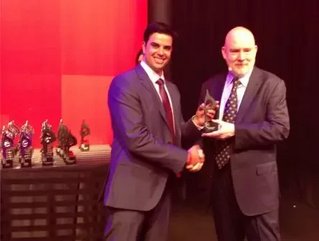 Independent South African-based public relations firm, Epic Communications, has scooped the coveted African Consultancy of the Year accolade at the 2014 Europe, Middle East and Africa (EMEA) SABRE* Awards, held in London on May 20, 2014.

The EMEA SABRE awards, which recognise agencies at the forefront of strategic communications practices, are among the most sought-after awards in the public relations field, attracting more than 2,000 entries from more than 20 countries throughout Europe, the Middle East and Africa.

“Winning our African Consultancy of the Year honour after growing its client base by 44 percent in 2013, reaching a staff complement of 42 consultants and cracking the ranks of the country’s top five.

“Much of this success is down to an impressive focus of quality and senior level-counsel, enabling it to work for such blue-chip clients as Nedbank, Samsung, Cipla, DHL, Old Mutual, Neotel and AEL Mining.

“Led by founder, Elian Wiener, Epic Communications has benefited from a strong focus on talent development and in-house training, along with an aptitude for multimedia content creation and thought leadership.

"This award means a huge deal to us as it signifies that we are well on track to achieving this goal. It also tells us that our agency’s strategic, creative approach and unrelenting focus on delivering tangible business results for our global and local clients is on a par with the very best in Africa and the world.

“In a highly competitive and fast-evolving PR and communications environment, we will continue to work hard and adapt in order to deliver best practice public relations, digital, social media, internal communications and investor relations services for our clients.”

The agency has over 40 consultants across its Johannesburg and Cape Town offices, servicing more than 45 retainer clients, including local and global brands, among other, Nedbank, DHL, Cipla, Old Mutual Corporate, Neotel and Business Partners.