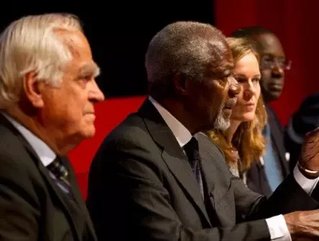 However, too often these resources are plundered by corrupt officials and foreign investors. Rising inequality is also blocking Africa from seizing that opportunity, the report shows.

It also demands international action to end what it describes as the plunder of Africa’s timber and fisheries.

The report calls for a “uniquely African green revolution” that adapts the lessons provided by Asia to African conditions.

Africa currently imports US$35 billion worth of food because local agriculture is dogged by low productivity, chronic under investment, and regional protectionism. Increased investment in infrastructure and research could dramatically raise the region’s yields and the incomes of farmers.

Meanwhile, eliminating the barriers that restrict trade within Africa could open up new markets.

While critical of African governments, the Africa Progress Report 2014 also challenges the international community to support the region’s development efforts.

It highlights fisheries and logging as two areas in which strengthened multilateral rules are needed to combat the plunder of natural resources.

Illegal, unregulated and unreported fishing has reached epidemic proportions in Africa’s coastal waters. West Africa is conservatively estimated to lose US$1.3 billion annually. Beyond the financial cost this plunder destroys fishing communities who lose critical opportunities to fish, process and trade. Another US$17 billion is lost through illicit logging activities.

Chaired by Kofi Annan, former Secretary-General of the United Nations, the 10-member Africa Progress Panel advocates at the highest levels for equitable and sustainable development in Africa. The Panel releases its flagship publication, the Africa Progress Report, every year in May.