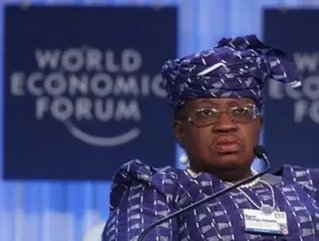 Africa has voiced their support for Nigerian Finance Minister, Ngozi Okonjo-Iweala to be elected as President of the World Bank; disrupting a post held by the US senate since World War 2.

Unless America finds an esteemed candidate very soon, it looks as though they will be beaten to the top job by either Okonjo-Iweala or Colombia’s Jose Antonio Ocampo, replacing their current President Robert Zoellick.

Since 1945, the position has been dominated by the US senate, but following John Kerry’s reluctance to run for the job, the door has been left open for another developed nation to take the reins.

From the 187 member nations, a World Bank board of 25 is formed; of which three are compiled from Africa. The finance ministers from Angola, Nigeria and South Africa are set to make the announcement of Okonjo-Iweala’s inclusion on Friday at a press conference in Petoria.

His candidacy has received extensive positive backing from the world’s ministers in general, and despite China, Brazil, Russia and India all having aspirations for their own members, their unity in dethroning America is resounding.

“We continue to believe that the president should be chosen based on merit, and it is very positive to have an open competition process,” declared Carlos Cozendey, the Secretary of Foreign Affairs at Brazil’s finance ministry.

His view is shared by many in a collaborative hope that developing countries can unite to produce a more democratic decision in future elections.

Former World Bank official, Domenico Lombardi has stated that this year’s election will be the first “truly contested decision”, and it is likely that Okonjo-Iweala and Ocampo will battle it out for the vacancy.

Any last ditch attempts by China look destined to be too little, too late, while the USA are focusing on a curve ball of their own.

To show their forward thinking transitional mindset, they are trying to convince ambassador, Susan Rice to become the first female president.

This seems to be their last hope to convince electorates that America are still the right country to lead the World’s finances, but the likelihood is that Nigeria, and indeed Africa as a whole, will be celebrating upon hearing the results.