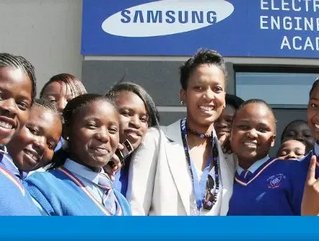 Samsung Electronics Co Ltd has announced it is to build a second engineering academy in Nigeria following the first project launched In Lagos in August.

The global leader in digital media and convergence technologies has entered an agreement with the Ekiti State Government to build the new academy which will open in early 2013.

Through the Engineering Academies, Samsung Electronics Africa supplies information technologies to help develop promising African students into IT experts and provide them with the support needed to secure employment or start their own businesses.

The first of these pioneering academies was built in South Africa last year, followed by another in Kenya before the start of the project in Nigeria this year.

Both parties discussed various cooperation approaches to help develop the education sector in Ekiti, including the opening of Engineering Academies and the adoption of educational IT solutions.

As part of the visit, Governor Kayode Fayemi of Ekiti visited Samsung Electronics’ Suwon business site and some of Korea’s educational and medical facilities, including the Samsung Delight Hall and the Samsung Medical Centre.

The governor said: “The IT revolution currently being led by Samsung is extraordinary. I expect Africa’s youths to learn a great deal thanks to the active support provided by Samsung’s IT Solutions division.”

Last year, Samsung Electronics signed a contract committing the company to supply 100,000 units of the NC 215S, a solar-powered netbook, to an educational institute in Ekiti State.

The netbook can be used for up to one hour when it is recharged for two hours using solar energy. Through the contract, Samsung is helping to lay a foundation for an improved IT and learning environment for Nigeria’s youth.