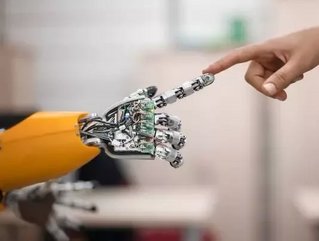 The robot has the potential to become a bomb disposal tool, and is designed to give the operator the same control as if they were using their own limbs, and also allows the user to feel everything the robot touches.

Dr Fady Alnajjar, assistant professor in the Department of Information Technology at UAEU, has developed, designed and built the first part of the project. These first initial stages have been funded by UAE Air Force, who provide AED 55,000 to the project.

Dr Alnajjar worked with a team of four students for more than a month to construct the first stage of the robot, which consists of two human controlled arms working via sensors. The arms have been based around that of someone in their 30’s.

Dr Alnajjar said: “The only way to sense a situation at present through using a robot is through vision – there is no sensory or tactile feedback from the environment. Also, the user will only be controlling a robot’s hand using a remote-controlled tool, but that is not like using an arm – it doesn’t allow the same level of freedom, such as how far you need to open a hand and hold a grasp. When we control our own arm, we don’t have to think of this type of thing; we don’t have to consider how much freedom we need or how far to open our fingers to hold a cup or open and close and door. Our brains automatically control this. We are building sensors which the controller can wear, and then all they need to do is move as if they actually are the robot,”

Dr Alnajjar added: “At the moment, its functionality is at around 50-60 per cent. It now needs some fine-tuning in the field, and there is the potential for it be customized to meet the needs of a particular client. With its potential to be used in bomb disposal, accuracy is the key requirement, and accuracy is what we are aiming for.”