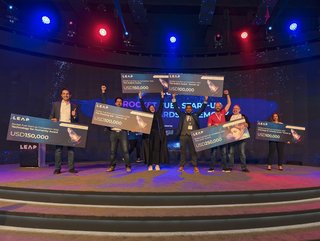 Drawing some 100,000 visitors, Saudi Arabia’s inaugural tech event Leap22 delivered over US$6.4bn of investments and initiatives – here are the highlights

The inaugural edition of Leap in Saudi Arabia in February has set new records for a debut technology event, attracting more than 100,000 registered attendees from more than 80 countries.

Some 700 exhibitors, including the world's leading tech companies and 1,500 startups, not to mention 500-plus international speakers, joined Leap22, both in Riyadh and virtually, making it the largest ever first edition for a technology event.

Considered a breakthrough success, and surpassing even CES, the three-day event not only set a new record for most attendees to a new platform, but also saw US$6.4 billion of investments and new technology initiatives.

Among speakers were Bjorn Osteria, co-founder of Oatly, Borje Ekholm, CEO of Ericsson, Rajeev Misra, CEO of SoftBank Investment Advisers; and Steven Bartlett, BBC Dragon’s Den and founder of Social Chain; and many others.

So, what were the highlights, innovations, launches and announcements?

Oil giant Saudi Aramco launched its Prosperity7 fund with US$1bn and a billion-dollar investment from NEOM Tech & Digital Company. With a focus on future technologies, Prosperity7 provides its portfolio companies with the funding and connections to scale and enter new markets to attain global reach. Amin Nasser, president and CEO of Saudi Aramco, said: “Prosperity7 will connect the dots through big ideas, top talents and disruptive technologies from around the world as we look beyond the energy value chain to areas like healthcare, education and blockchain, for viable solutions to the world’s most pressing challenges.”

NEOM Tech & Digital Company, the first subsidiary of NEOM, unveiled XVRS, a 3D cognitive digital twin metaverse platform envisioned to enable a ground-breaking ‘mixed-reality’ urban living model. Combining digital and physical architectures with hyper-connected technologies and AI features, XVRS will enable seamless integration of the virtual and real worlds. It aims to offer users ‘multiple points of view’ and the ability to feature in a variety of locations across the metaverse in real-time, via teleportation, as an avatar, hologram or robotic avatar. This announcement forms part of the company’s investment of nearly US$1bn in AI-driven products and hyperconnected, autonomous solutions. “The future will be defined not any megacities, but by cognitive meta cities,” says Joseph Bradley, CEO, NEOM Tech & Digital Co. “XVRS is the only iteration of the metaverse currently in development that will be a mix-reality, 3D Digital twin of a physical place - in our case, the NEOM Community.”

The Saudi Telecom Company (STC) announced MENA HUB, a US$1bn investment in submarine cables and data centres infrastructure. STC signed more than 15 agreements, including with Microsoft, Ericsson and Cisco, as well as a strategic partnership with Huawei to establish a factory to localise data centres in the Kingdom, delivering manufacturing facilities for data centre equipment and hardware to boost the kingdom’s capacity in the high-tech industry, create local supply chains for technology hardware and increase the adoption of new technologies by Saudi businesses.

LEAP gave birth to ‘The Garage: Start-up District’, an innovation hub that “seeks to establish a successfully proven innovative environment, such as Silicon Valley, Station F and others”, according to Munir Eldesouki, president of the King Abdulaziz City for Science and Technology. “It aims to create a similar startup culture that integrates innovation processes, creative thinking, design testing, and entrepreneurship under one roof, while attracting the brightest minds from across the kingdom and abroad, encouraging them to turn their dreams into realities, their ideas into innovations, and their startups into unicorns.” The hub offers a physical space, incubator and accelerator, access to deep-tech labs, talent and research networks, as well as grants, investment, mentorship programmes and marketing and training support.

Multinational organisation the Digital Cooperation Organization (DCO), unveiled the DCO startup passport – designed to make it quicker, easier and less expensive for startups to do business across borders. The startup passport provides expedited entry and support in the markets of eight DCO countries. The initiative will be rolled out initially in Saudi Arabia and Nigeria. According to Deema Al-Yahya, secretary-general of the DCO, the passport “reduces administrative and financial burdens and accelerates corporate registration and other processes for entrepreneurs”.

Apple selected Riyadh for its first Apple Developer Academy headquarters in the Middle East and North Africa region. The academy caters solely to female programmers and developers and is located at the Princess Nourah bint Abdulrahman University.